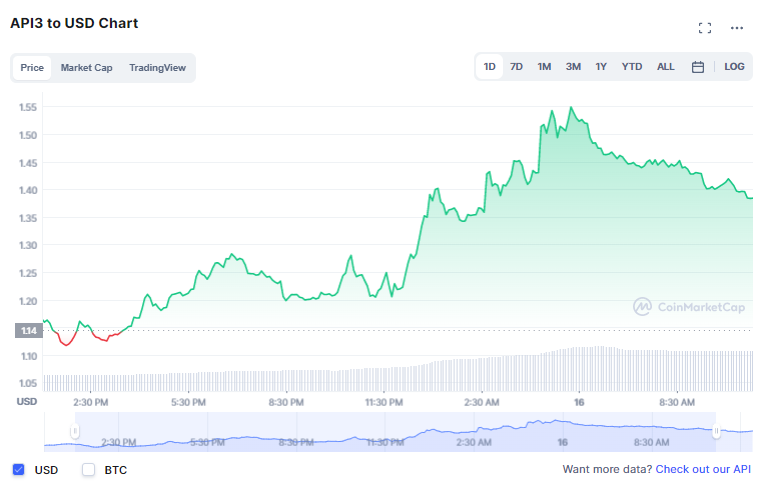 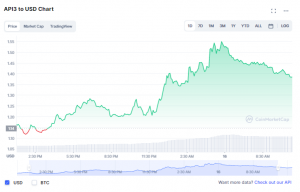 The crypto dip continues to loom over investors with a combination of rising inflation, geopolitical tensions, tightening of monetary policies, and Celsius collapse fears in play.

With investors looking for ways to insulate themselves from the current market collapse, finding digital assets that have remained profitable throughout the market meltdown is very vital.

The following 9 coins have remained as the top crypto gainers over the last 24 hours despite most of the market experiencing double-digit losses.

9 Top Crypto Gainers to Invest In

TRON (TRX) is a decentralized blockchain-based operating system that was launched in 2017 by the Tron Foundation. TRX coins were originally ERC-20-based tokens distributed on Ethereum, however, they were relocated to their own network a year later.

The project was started with the intention of giving digital content creators full ownership rights. The main goal is to assist content creators (who only receive a small portion of the income) and encourage them to work harder by providing more rewards. 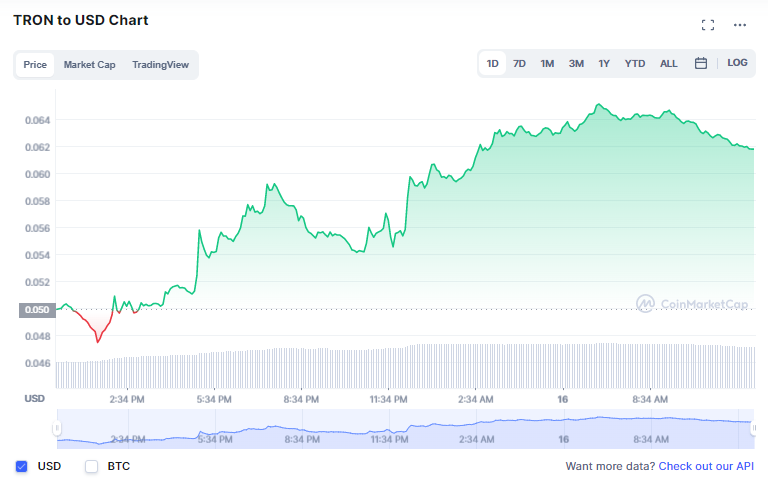 Smart contracts, various types of blockchain systems, and decentralized applications (dApps) are all supported by the TRON program. The cryptocurrency platform employs the UTXO transaction paradigm, which is similar to Bitcoin (BTC). Users can follow the history of operations in a public ledger where transactions take place.

Today’s TRON price is $0.061760, with $2.57 billion in 24-hour trading volume. TRON has increased by a significant 24.30% in the last 24 hours. The coin’s current market capitalization is $5.71 billion. It has a circulating quantity of 92 billion TRX coins, while information on the maximum supply is not available.

The Basic Attention Token, or BAT, is an inventive blockchain-based digital advertising network that aims to appropriately reward users for their attention while also giving advertisers a greater return on their ad spends.

Users may watch privacy-preserving advertisements on the Brave Browser and earn BAT rewards for doing so. Advertisers, on the other side, can send personalized ads to increase engagement and reduce losses due to ad fraud and misuse. 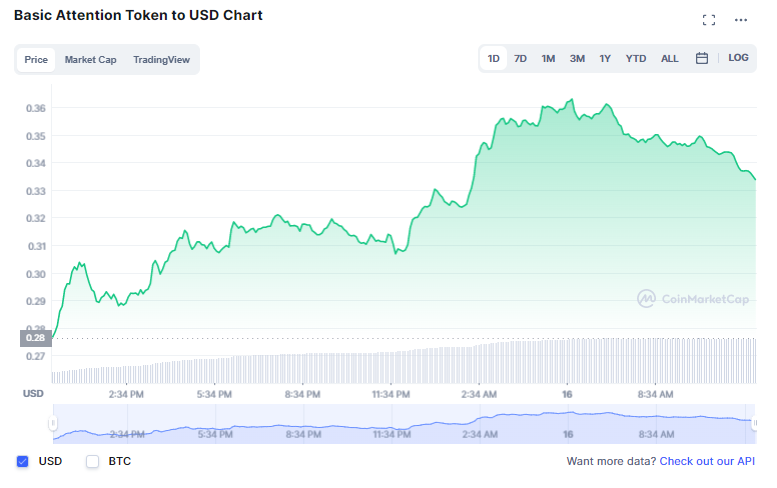 Basic Attention Token was released in 2017 after one of the fastest-selling initial coin offers (ICOs) in history, generating $35 million in less than a minute. Through its Brave Rewards program, it has since expanded its attention-based advertising experience to users in the majority of countries.

API3’s stated purpose is to make it possible to build, maintain, and monetize decentralized APIs at large scales. As blockchain technology becomes more widely used in the economy — from decentralized finance to supply chain management — the team behind this initiative claims that smart contracts’ ability to give “timely, trustworthy real-world data” has never been more critical.

API3’s whitepaper was released in September 2020, and it outlined the biggest issue with APIs at the time: connection. Oracles, a type of middleware, continue to sit between APIs and smart contracts, raising prices and centralizing control.

API3 aims to solve this problem by allowing API providers to manage their own nodes. API3 launched its token at the beginning of December, following a successful token sale that raised tens of millions of dollars.

Solana is an open-source project that uses the permissionless aspect of blockchain technology to create decentralized financial (DeFi) solutions.

The Solana protocol is intended to make the construction of decentralized apps (DApps) easier. It intends to increase scalability by combining a proof-of-history (PoH) consensus with the blockchain’s underlying proof-of-stake (PoS) consensus.

Small-time traders and institutional traders alike are interested in Solana because of its revolutionary hybrid consensus mechanism. The Solana Foundation is working hard to make decentralized finance more accessible on a bigger scale. 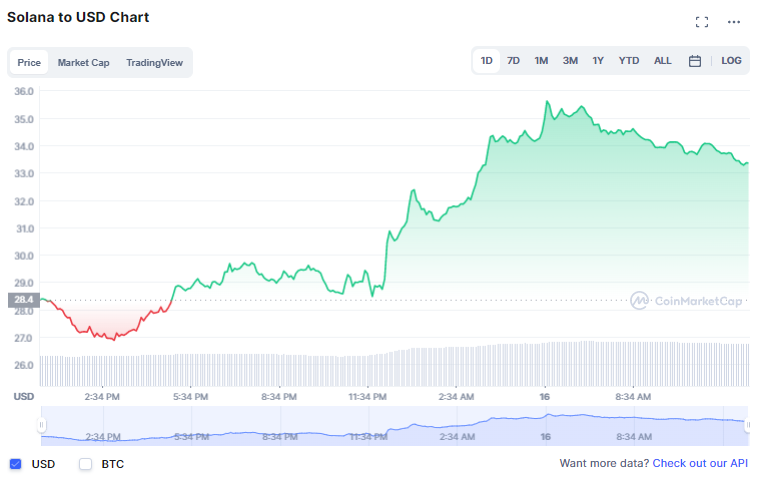 Customers will not be startled by higher fees and taxes, which is one of Solana’s primary pledges to them. The protocol is built in such a way that transaction costs are kept low while scalability and speed are maintained.

Solana is currently trading at $33.35 with a 24-hour trading volume of $254 billion. In the previous 24 hours, Solana has gained 18.03 percent. The current market capitalization is $11.4 billion dollars. There are 342 million SOL tokens in circulation.

Decentraland (MANA) is a virtual reality platform based on the Ethereum blockchain that allows users to create, enjoy, and monetize content and apps. Users acquire plots of land in this virtual environment, which they may then navigate, develop on, and monetize.

Decentraland was founded in 2017 as a result of a $24 million initial coin offering (ICO) and opened to the public in February 2020. Users have since built a variety of interactive experiences on their LAND parcels, including interactive games, expansive 3D scenes, and a number of other interactive activities. 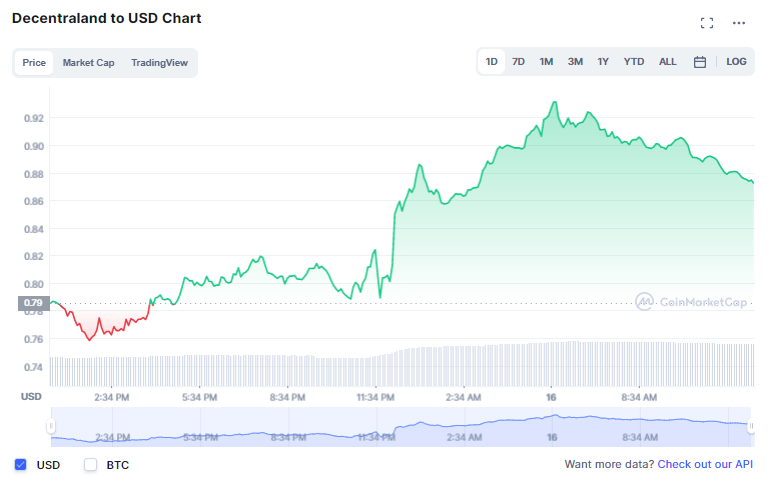 MANA and LAND are the two tokens used in Decentraland. On the Decentraland marketplace, ERC-20 MANA tokens must be burned to acquire ERC-721 LAND tokens. MANA can also be used to purchase a variety of avatars, wearables, names, and other items.

The current Decentraland price is $0.874189, with a $425 million 24-hour trading volume. In the previous 24 hours, Decentraland has gained 12.17 percent. The current market capitalization is $1.616 billion. There are 1.85 billion MANA coins in circulation.

Algorand is a self-sustaining, decentralised, blockchain-based network that may be used for a variety of purposes. These systems are safe, scalable, and efficient, which are all important characteristics for real-world applications.

The Algorand mainnet was live in June 2019 and by December 2020, it could process around 1 million transactions per day. The Algorand initial coin offering (ICO) took place in June 2019, with a token price of $2.4. 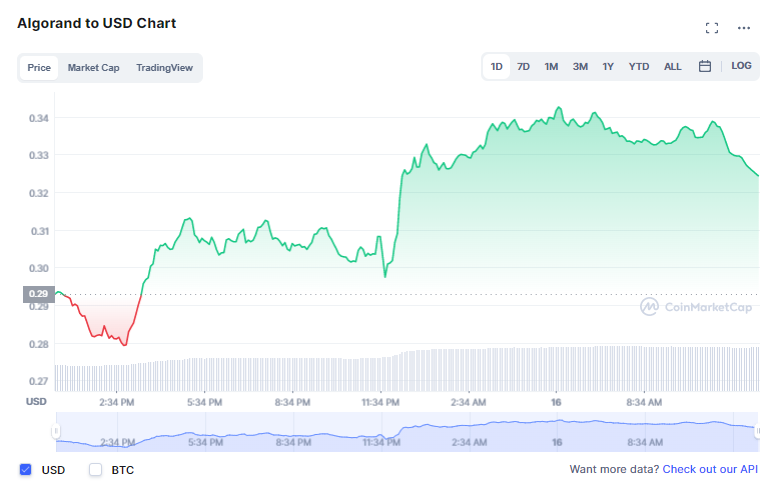 Because Algorand is based on a permissionless pure proof-of-stake (PoS) blockchain system, it has cheaper transaction fees and no mining (unlike Bitcoin’s energy-intensive procedure).

Today’s Algorand price is $0.325359, with a $237 million 24-hour trading volume. In the previous 24 hours, Algorand has gained 11.77 percent. The current market capitalization is $2.23 billion. There are 6.86 billion ALGO coins in circulation, with a maximum supply of 10 billion ALGO coins.

The Ethereum Name Service (ENS) is a “distributed, open, and extendable naming system based on the Ethereum blockchain,” according to its description. ENS converts human readable Ethereum addresses such as john.eth into machine-readable alphanumeric numbers that can be read by wallets like Metamask.

Metadata and machine-readable addresses can also be converted back to human readable Ethereum addresses using the platform.

As a result, ENS contributes to making the Ethereum-based web more accessible and clearer for human understanding, much like the Domain Name Service (DNS) does for the internet. A domain system based on dot-separated hierarchical names exists on ENS as well. Owners of domains have complete control over their subdomains. 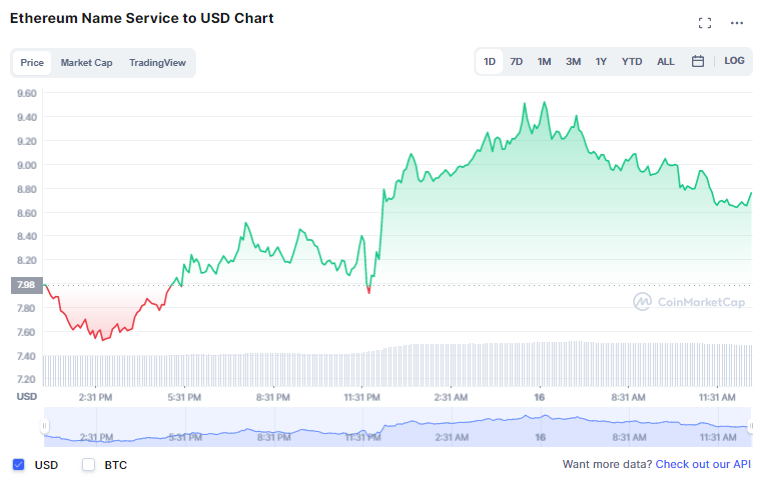 The ENS network was inaugurated in November 2021 with an extremely successful airdrop. Users that registered their addresses prior to the token’s introduction were given a special bonus.

By providing an ecosystem of connected blockchains, Cosmos aims to provide an antidote to “slow, expensive, unscalable, and environmentally harmful” proof-of-work protocols like those used by Bitcoin.

Cosmos is referred to as “Blockchain 3.0,” with a modular software development kit. A modular framework that demystifies decentralized apps is one of the project’s other goals, which includes making blockchain technology less complex and difficult for developers. 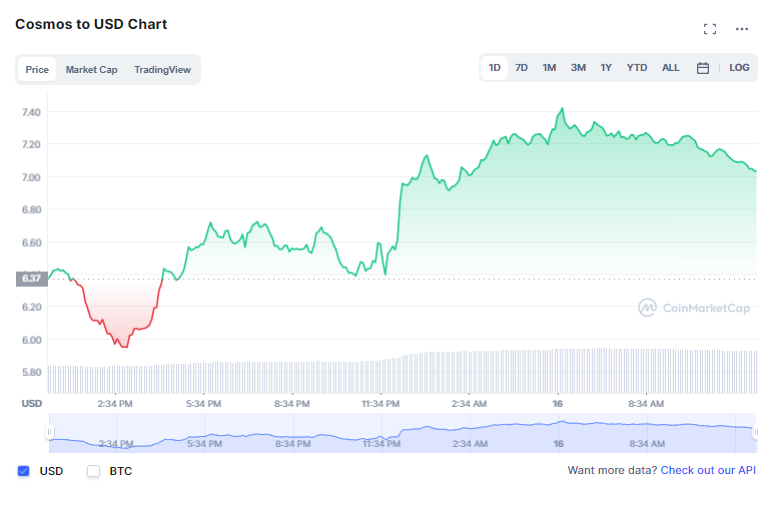 Finally, an Inter-blockchain Communication protocol makes it easier for blockchain networks to communicate with one another, reducing industry fragmentation.

The current Cosmos price is $7.03, with $393 million in 24-hour trading volume. In the previous 24 hours, Cosmos has gained 10.71 percent. The current market capitalization is $2 billion. There are 286 million ATOM in circulation.

Zcash is a privacy and anonymity-focused decentralised cryptocurrency. It employs the zk-SNARK zero-knowledge proof technology, which allows network nodes to verify transactions without disclosing any sensitive information.

Zcash transactions must still be relayed through a public blockchain, but unlike pseudonymous cryptocurrencies (in which each user has their own public address or addresses that can be traced back to them using data science and blockchain forensics), ZEC transactions do not reveal the sending and receiving addresses, or the amount being sent by default. 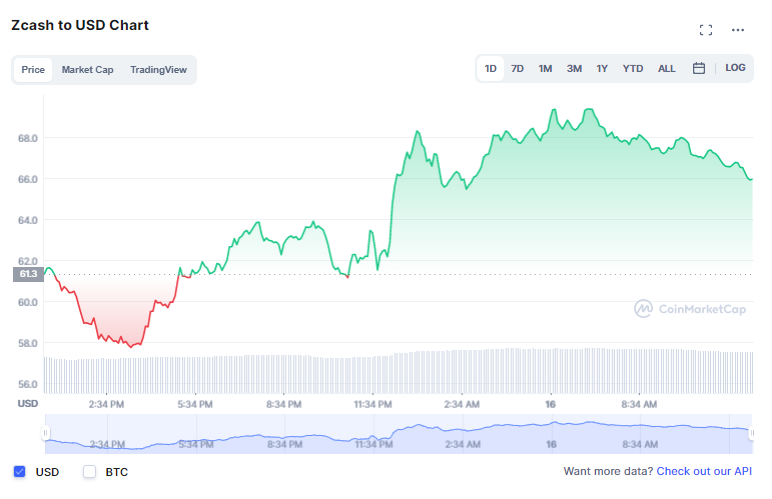 There is, however, the option of disclosing this information for the purposes of auditing or regulatory compliance. This enables Zcash to provide its users with the right to privacy while still allowing them to benefit from the benefits of a decentralized, permissionless digital currency. Z cash was first launched on October 28, 2016 and was based on the Bitcoin codebase at the time.

Is the Crypto Market Bouncing Back?

The fact that the above altcoins are increasing in value is certainly welcome news for many.

It is still a good idea to be cautious. The crypto market continues to shiver in the dead of winter, and prices can shift at any time. The top two cryptocurrencies – Bitcoin and Ethereum – continue to plummet at their 12- to 18-month low levels.

Major exchanges such as Coinbase and Gemini have announced mass layoffs, while Celsius’ pause on withdrawals is sending ripples of doubt and uncertainty among investors.

This is why while many traders believe that the bounce-back of altcoins would balance much of the main crypto losses, others remain skeptical.

Keep up with IB news to stay on top of the newest crypto news so you can remain ahead of the curve and make informed investing decisions. 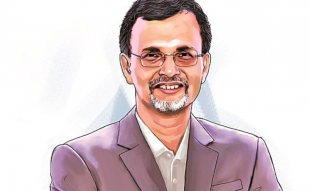 Join Our Telegram channel to stay up to date on breaking news coverage Indian ...