Homenews5 recession proof stocks to buy in the market crash 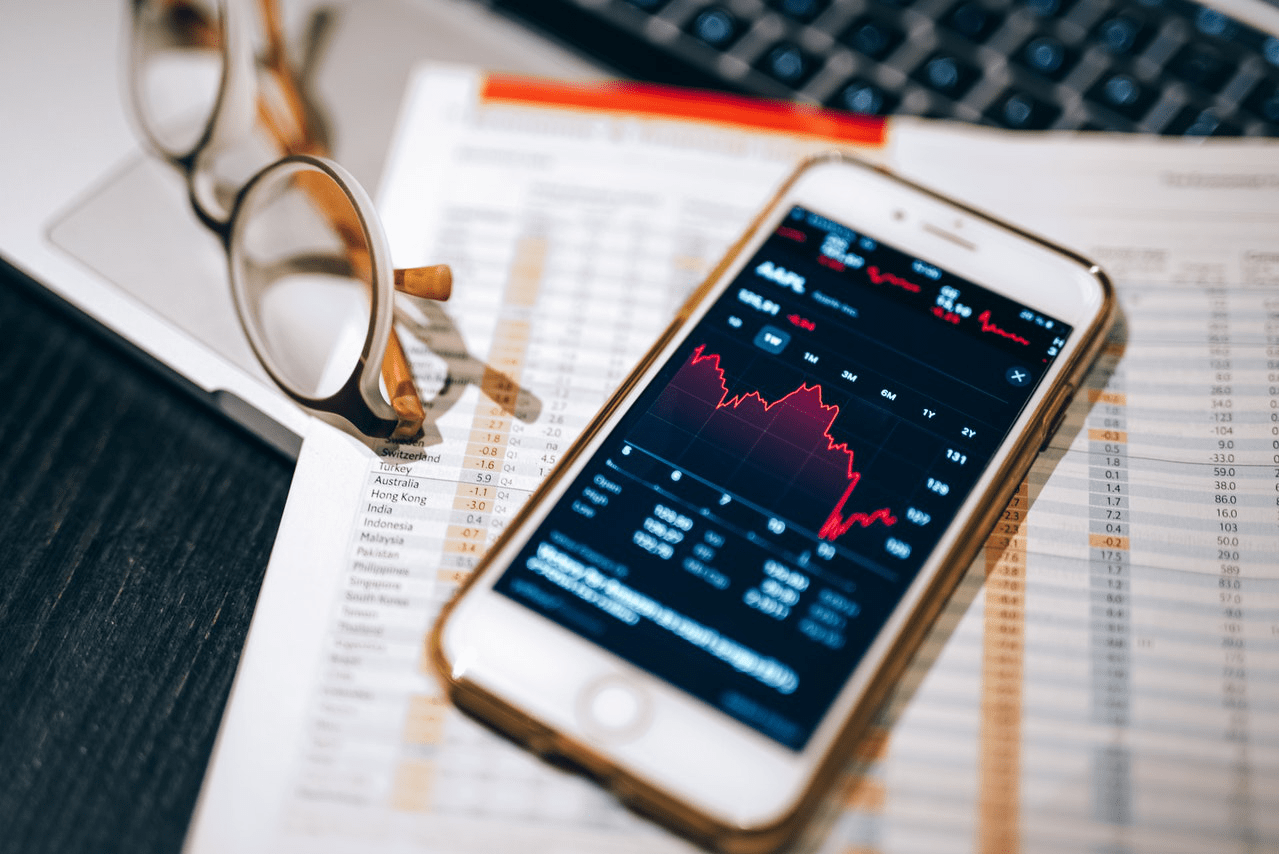 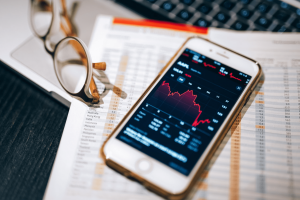 With each new record high in the stock market, investors’ confidence and dread rise. Are we near the end of this year’s high point? Is there a bubble around us? Whether the economy is on the verge of a recession remains to be seen. The following are some of the most often asked questions.

Taking a Closer Look at What Recession Is

The decline in economic growth not only halts the creation of new employment but also results in the loss of current ones. New issues arise as a result of this. Consumers are becoming more frugal in their expenditures as fear spreads across the country. Over a few people have withdrawn their assets and savings to withstand the current economic storm.

When the stock market is experiencing a sell-off, investors tend to panic and liquidate their holdings to keep up with the crowd. This is only made worse by the fact that recessions also carry with them other difficulties like inflation.

Investing during a recession may be very difficult. During the contraction phase, stock market corrections and bear markets are more likely to occur. Businesses particularly vulnerable to the economic cycle, such as cyclical equities, take a beating during a downturn.

However, certain stock market sectors are insulated from the economic cycle’s ups and downs. Investors may hang on to these companies in times of economic uncertainty since they are fairly recession-proof. Here’s a deeper look at where to put your money if you’re concerned about the economy’s future.

In the Event of a Stock Market Crash, Here are Five Stocks to Buy:

Even high-quality equities are pulled down when the U.S. economy goes into freefall. Even a small number of equities beat the S&P 500. If there is a bear market in 2022, you may use these recession-resistant equities to your advantage. In 2008 and 2020, the S&P 500 outperformed these five equities recommended by CFRA Research.

Engineers may create and test semiconductor devices and other software applications using the Synopsys platform. Even in a depressed economy, the semiconductor sector is anticipated to be a long-term growth market for chip testing and design services.

Synopsys announced a 25 percent sales growth, 47% earnings per share increase, and an operating margin improvement of 5.8% in the most recent quarter. According to analyst John Freeman, Synopsys’ intellectual property sector is rising, and the company’s overall fundamentals are strengthening. SNPs ended at $296.18 on June 17 with a “strong-buy” rating from CFRA and a $429 price target.

The Federal Reserve routinely lowers interest rates as the first response to a recession. As a result of historically low mortgage rates and the scarcity of socially engaging activities, the housing and home remodeling industries are expected to expand in the year 2020.

In 2022 or 2023, home improvement equities may be able to withstand an economic downturn, according to analyst Kenneth Leon. In 2023, home improvement expenditure is expected to climb by about 20%, and Leon expects particularly high demand for Lowe’s Pro sector. CFRA has issued a “buy” rating and a price target of $235 for LOW shares, which closed at $172.47 on June 17.

In each of the last two recessions, Walmart outperformed the rest of the retail sector. Americans can’t survive without food, but they may cut costs by bargain shopping at Walmart when circumstances are rough. 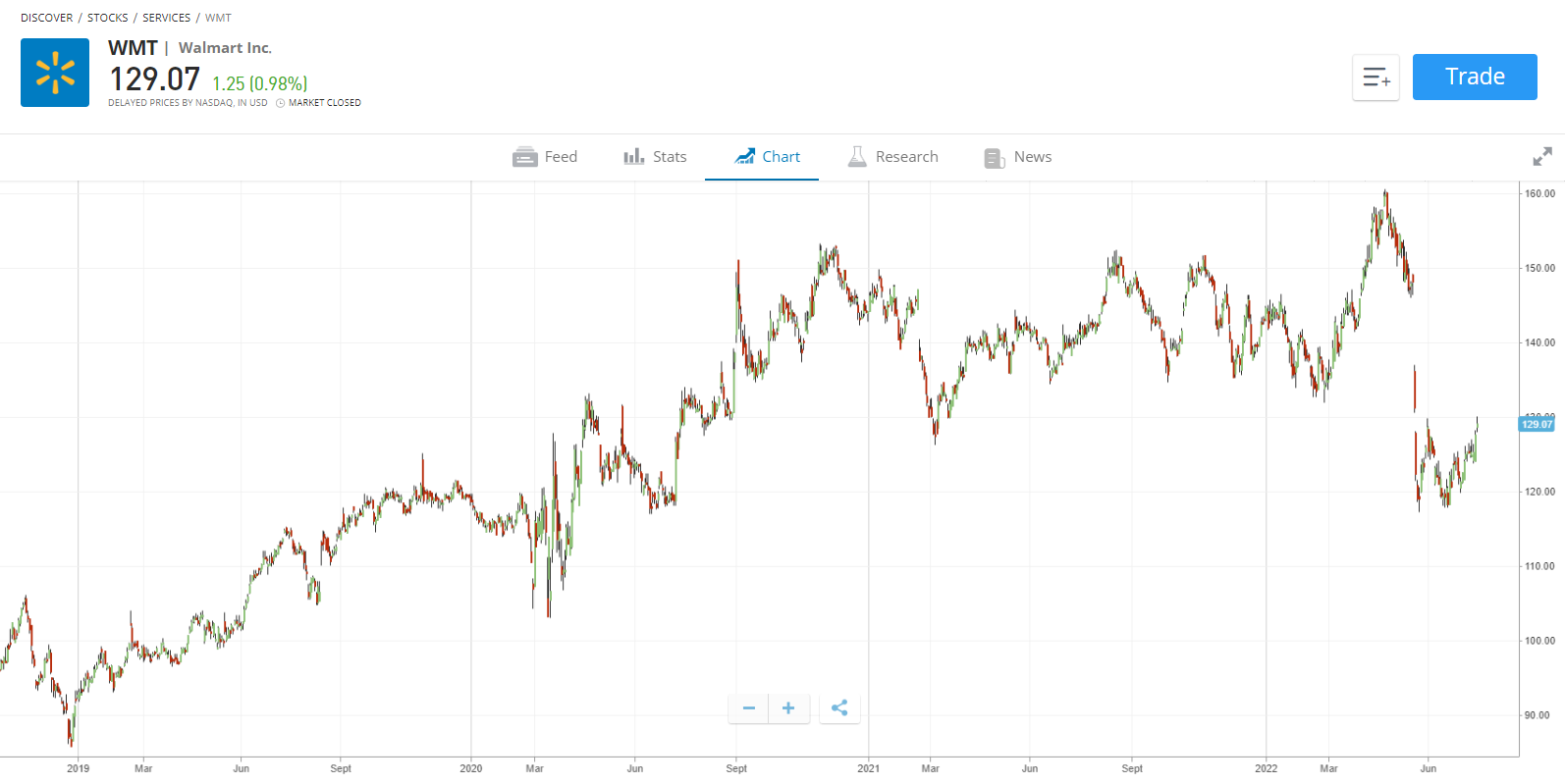 According to Arun Sundaram, a retail analyst, Walmart has spent heavily in recent years on various changes to its business model, including e-commerce, technology, and automation, all of which are major growth areas. Advertisement revenue, data monetization, and financial services are other sources of revenue for Walmart. WMT ended at $118.29 on June 17 with a “buy” rating from CFRA and a $162 price target.

We all may find various medical supplies and services at Abbott Laboratories. The pandemic in 2020 is reasonable, but Abbott’s shares outperformed by a larger amount in 2008 than many other health care firms. 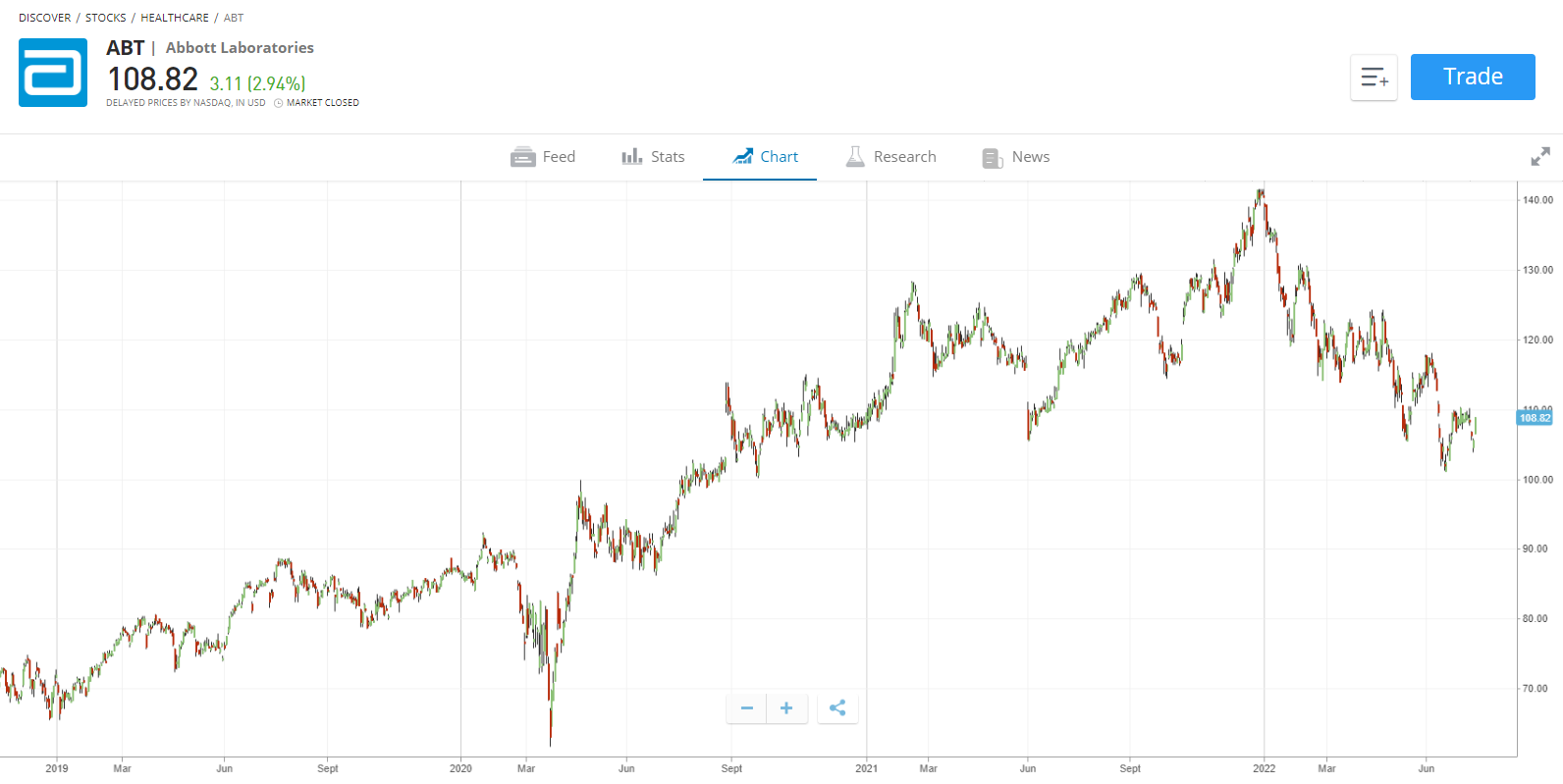 According to analyst Paige Meyer, Abbot can thrive in every environment since it has a wide range of products and a good financial position. Covid-19 sales will provide Abbott with a healthy return on investment for the foreseeable future, Meyer believes.

She believes that medical gadgets for diabetes care will be a major development driver in the long run. ABT ended at $102.53 on June 17 with a “buy” rating from CFRA and a $142 price objective.

Buy ABT on eToro Now

The utility holding company NextEra Energy owns Florida Power and Light and NextEra Energy Resources, both of which are subsidiaries of the parent firm. Stocks in the utility sector are frequently seen as a haven during economic downturns because of their reputation as defensive assets. Utilities have a solid and predictable client base with a limited number of rivals.

In both 2008 and 2020, shares of NextEra exceeded the S&P 500 by double-digit percentages. According to analyst Daniel Rich, NextEra has a substantial backlog of renewable energy and storage-development contracts expected to deliver robust earnings per share growth. NEE ended at $70.81 on June 17 with a “buy” rating from CFRA and a $92 price target.

Recession-Proof Industries: What the Future Holds

Defensive stocks have been losing ground as a share of the whole stock market. Their share of the S&P 500 has dwindled from 40 percent in the early 1990s to less than 16 percent as of 2018. New recession-proof sectors will likely develop as entrepreneurs capitalize on demographic, travel, nutritional, environmental, and personal health trends that have emerged over the previous decades.

There will always be a downturn. Because of this, investors need to build fully diversified portfolios to withstand market downturns. Investment in firms from various industries, especially recession-resistant ones, is essential to building a well-diversified portfolio.

A well-balanced investment portfolio should include a mix of blue-chip firms with a proven track record of weathering economic downturns. For investors during a recession, blue-chip stocks provide a concrete return in the form of dividends, making them a good choice. To mitigate the impact of a market sell-off or recession, investors should focus on blue-chip companies in recession-resistant sectors. 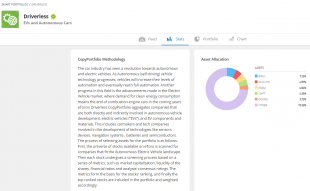 The Driverless Cars smart portfolio on eToro has returned more than 52% in gains ...